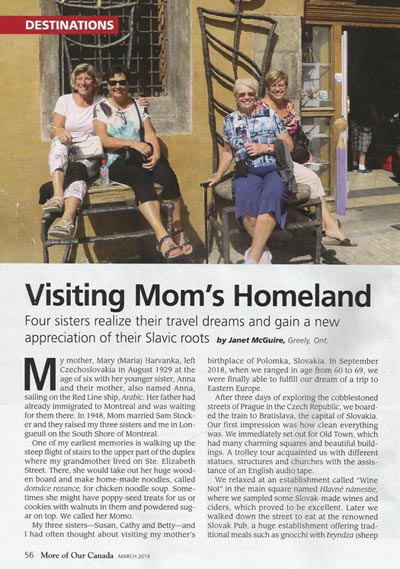 Four sisters realize their travel dreams and gain a new appreciation of their Slavic roots by Janet McGuire, Greely, Ont.
Trip review published in a Reader's Digest magazine - More of Our Canada, March 2019

My mother, Mary (Maria) Harvanka, left Czechoslovakia in August 1929 at the age of six with her younger sister, Anna and their mother, also named Anna, sailing on the Red Line ship, Arabic. Her father had already immigrated to Montreal and was waiting for them there. In 1948, Mom married Sam Stocker and they raised my three sisters and me in Longueuil on the South Shore of Montreal.

One of my earliest memories is walking up the steep flight of stairs to the upper part of the duplex where my grandmother lived on Ste. Elizabeth Street. There, she would take out her huge wooden board and make home-made noodles, called domáce rezance, for chicken noodle soup. Some-times she might have poppy-seed treats for us or cookies with walnuts in them and powdered sugar on top. We called her Momo.

My three sisters Susan, Cathy and Betty and I had often thought about visiting my mother’s birthplace of Polomka, Slovakia. In September 2018, when we ranged in age from 60 to 69, we were finally able to fulfill our dream of a trip to Eastern Europe.

After three days of exploring the cobblestoned streets of Prague in the Czech Republic, we boarded the train to Bratislava, the capital of Slovakia. Our first impression was how clean everything was. We immediately set out for Old Town, which had many charming squares and beautiful buildings. A trolley tour acquainted us with different statues, structures and churches with the assistance of an English audio tape.

We relaxed at an establishment called “Wine Not” in the main square named HIavné námestie, where we sampled some Slovak-made wines and ciders, which proved to be excellent. Later we walked down the street to eat at the renowned Slovak Pub, a huge establishment offering traditional meals such as gnocchi with bryndza (sheep cheese) and featuring many diversely decorated rooms.

The next day, we explored Bratislava Castle, which was built in the 13th century. It is an imposing structure on a hill of the Little Carpathians overlooking the Danube. We walked along the river to the stunning Church of St. Elizabeth, which is widely known as the Blue Church because of the powder-blue colour of its facade. 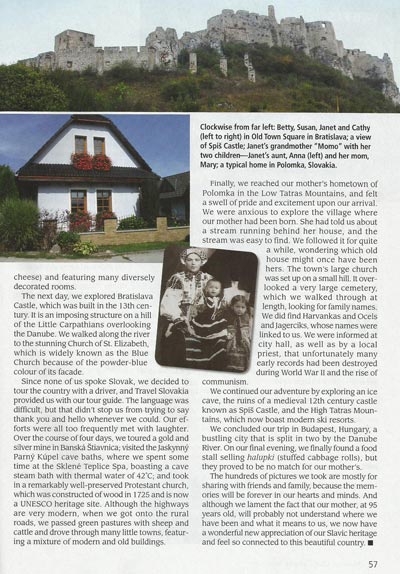 Since none of us spoke Slovak, we decided to tour the country with a driver, and Travel Slovakia provided us with our tour guide. The language was dif?cult, but that didn't stop us from trying to say thank you and hello whenever we could. Our efforts were all too frequently met with laughter. Over the course of four days, we toured a gold and silver mine in Banská Štiavnica; visited the Jaskynný Parný Kúpel cave baths, where we spent some time at the Sklené Teplice Spa, boasting a cave steam bath with thermal water of 42°C and took in a remarkably well-preserved Protestant church, which was constructed of wood in 1725 and is now a UNESCO heritage site. Although the highways are very modern, when we got onto the rural roads, we passed green pastures with sheep and cattle and drove through many little towns, featuring a mixture of modern and old buildings.

Finally, we reached our mothers hometown of Polomka in the Low Tatras Mountains, and felt a swell of pride and excitement upon our arrival. We were anxious to explore the village where our mother had been born. She had told us about a stream running behind her house, and the stream was easy to find. We followed it for quite a while, wondering which old house might once have been hers. The town's large church was set up on a small hill. It overlooked a very large cemetery, which we walked through at length, looking for family names. We did find Harvankas and Ocels and Jagerciks, whose names were linked to us. We were informed at city hall, as well as by a local priest, that unfortunately many early records had been destroyed during World War II and the rise of communism.

We continued our adventure by exploring an ice cave, the ruins of a medieval 12th century castle known as Spiš Castle, and the High Tatras Mountains, which now boast modern ski resorts.

We concluded our trip in Budapest, Hungary, a bustling city that is split in two by the Danube River. On our ?nal evening, we finally found a food stall selling halupki (stuffed cabbage rolls), but they proved to be no match for our mothers.

The hundreds of pictures we took are mostly for sharing with friends and family, because the memories will be forever in our hearts and minds. And although we lament the fact that our mother, at 95 years old, will probably not understand where we have been and what it means to us, we now have a wonderful new appreciation of our Slavic heritage and feel so connected to this beautiful country.


Janet with sisters from the USA
- rating 5