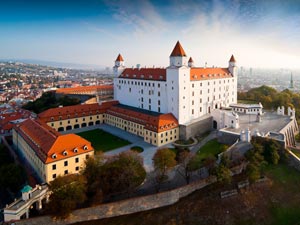 The dominant of Bratislava city lies on a city hill since the 9th century. The castle changed its appearance and purposes over the centuries. In the 16th - 19th century, Bratislava was a coronation city of Hungarian rulers. Nowadays the castle houses The History Museum and The National Museum. 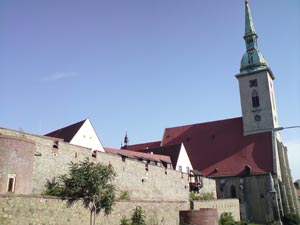 Gothic cathedral is located in the Old Town of Bratislava. St Martin's Cathedral origins in the 13th century, built in Romanesque style. A century later it was rebuilt into Gothic Dome. In the 16th - 19th century the cathedral was a coronation place of Hungarian rulers. During this period 19 Hungarian kings and queens were crowned there, including the most significant Rudolph II and Maria Theresia. 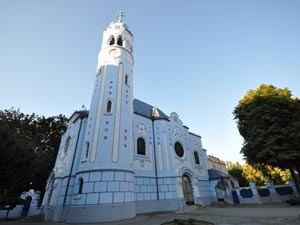 The Blue Little Church represents one of the world highlights in Art Noveau architecture, built in early 20th century. The exterior of St Elizabeth's church is decorated with blue and bright majolica tiles (manufactured in small town of Modra in Western Slovakia, the only place where Majolica is made).

Devin Castle is located above the confluence of the rivers Danube and Morava. At the times of the Roman Empire, the castle was a part of Limes Romanus fortifications and played an important role as a boundary fortress. Nowadays the ruins of Devin Castle serve as a museum. 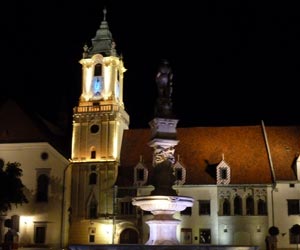 The Old Town Hall was built in the 15th century by connecting 5 burgher houses built in various architectural styles. In late 16th century it was rebuilt in Renaissance style and later, in the 18th century, the tower was reconstructed in the baroque style. The building houses The Municipal museum, the oldest one in Bratislava.