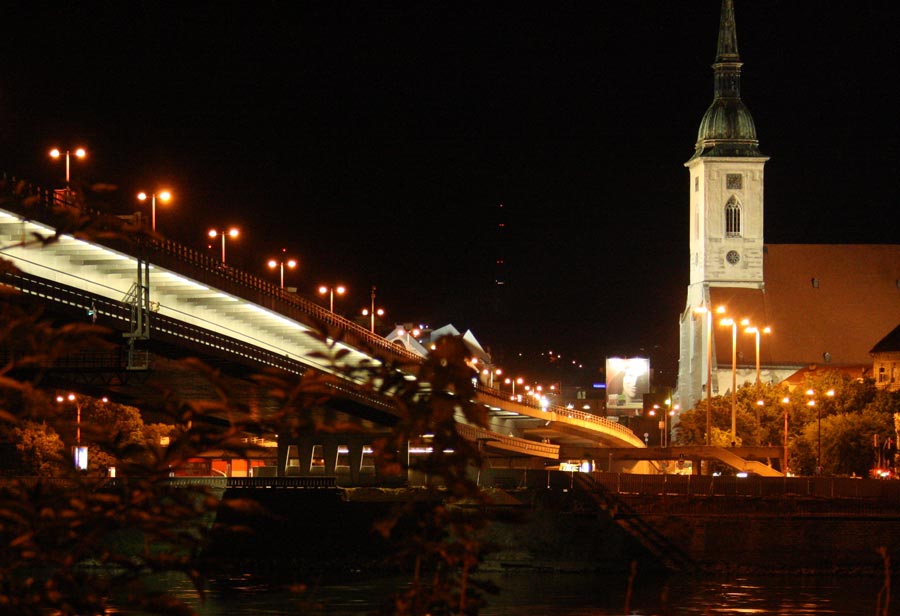 Trencin castle rises on a high reef above Trencin town. Trencin castle was built on the Slavic settlement site from the 11th century and served as a royal guard castle. His oldest monument is the Romanesque rotunda, but also dominating Matus's tower from the times of the reign of Palatine Matus Cak Trenciansky. Cannon bastion is located right next to the chapel in the lower part of the castle. Courtyard has preserved famous well of love well-known from a legend about tragic love of Omar Turk and beautiful Fatima. The interesting objects include historic castle barracks and the clock tower. The history of the castle reef dates back to the Roman Empire, as evidenced by the inscription on the castle rock from 179 A.D., proclaiming victory of II. Roman Legion over the Germans at Laugaricium. 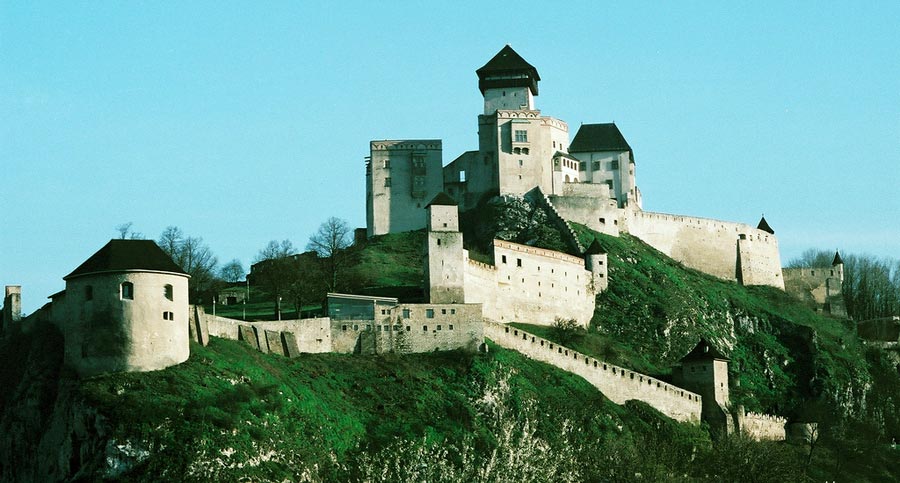 Trnava is nice, and in terms of history, a very important city. It is also called "Slovak Rome", as it boasts several dozen church steeples and in proportion to the area of the city with plenty of churches.

The historic center is surrounded by city walls that were used to protect the city from enemies in the past.

Another historical site of Trnava is very pleasant Trinity Square. At Trinity Square, there is 57 meters high town tower. On the top of the tower is placed a gilded statue of the Virgin Mary. 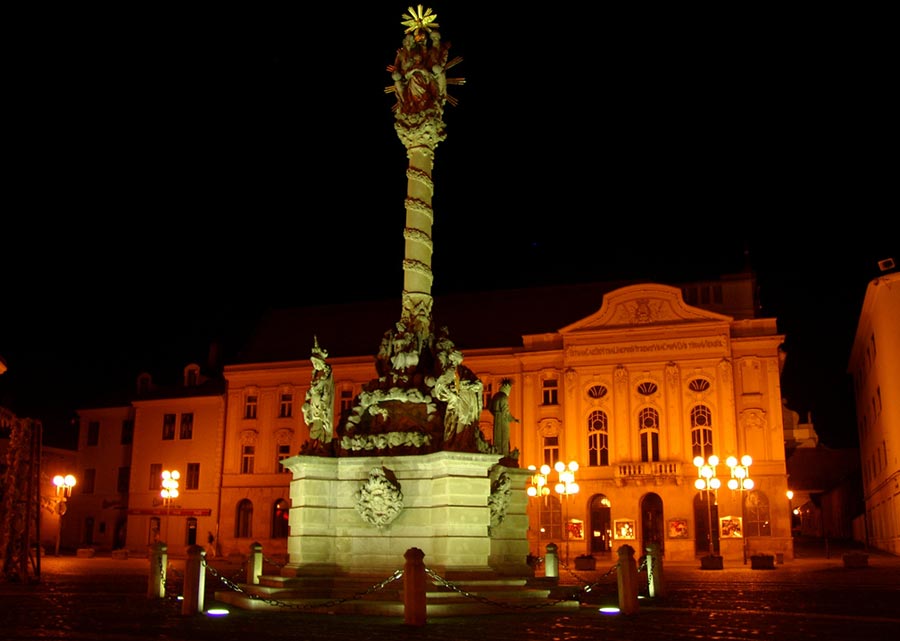 Topolcianky village lies north of Zlate Moravce town in western Slovakia at the foot Tribec hill. At the north end of the village Topolcianky lies large English park in which it is located picturesque Topolcianky castle, dated from the 15th to 16th century. Its main classicist wing is incorporated into the three renaissance wings, which conclude courtyard with a fountain in the middle.

The castle stands on the site of a Gothic water castle and later Renaissance fortress, which was significantly rebuilt in the 16th and 17th century. In early 19th century, the owner had to demolish the southern renaissance wing of the castle and in its place built a classicist tract, which is considered one of the finest and purest expressions of architectural classicism in Slovakia.

The Topolcianky castle was once the summer residence of the Habsburgs, after the World War I it served as a presidential resort. 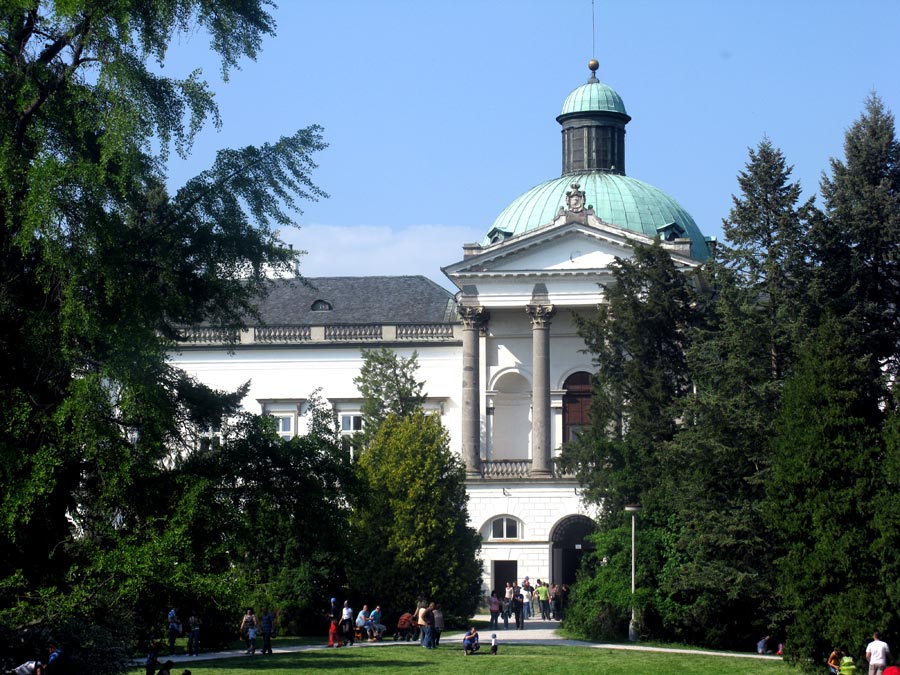 Museum of Liptov village in Pribylina is the most attractive landmark of the Liptov region as a part of Zilina region. The museum lies at the foot of the High Tatras mountains. It shows the typical folk architecture of the Liptov region. The impetus to the establishment of the museum of Liptov village in Pribylina was the extensive flooding caused by the construction of Liptovska Mara dam.

The most important cultural monuments were moved from eleven flooded villages and communities. Now they constitute the main exhibits of the museum of Liptov village in Pribylina. Entire original buildings were dismantled and moved to the museum. Museum of Liptov village in Pribylina was opened to public in 1991. It is the most recently opened open-air museum of Slovakia. 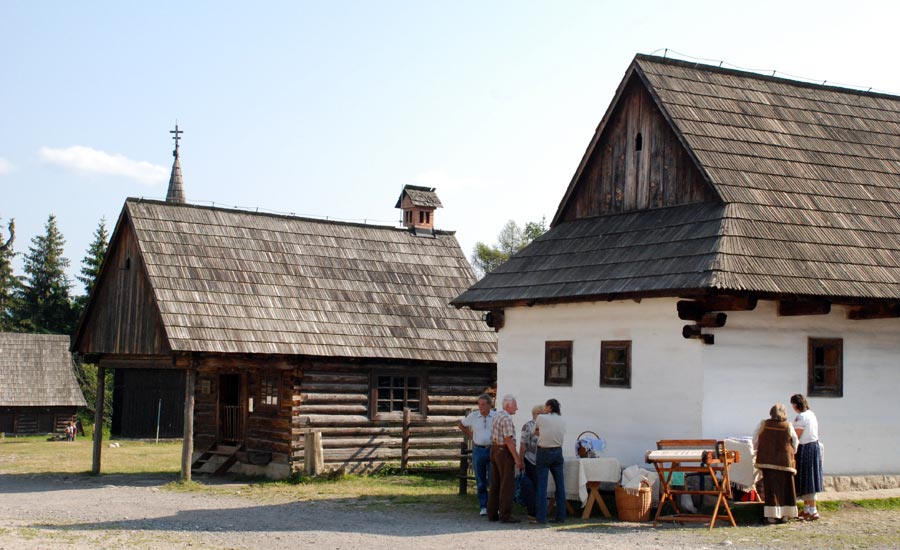 There is a number of different bridges on the Slovak railways. Among the most interesting, however, is definitely a bridge, which is located on the route 173 near Telgart village below Kralova hola mountain in the Low Tatras. It is a stone viaduct Chmaroska.

The Chmaroska viaduct is actually built entirely in the arc with a radius of 300 meters. Stone arch bridge is composed of nine holes with caliber of 10 meters. This is a unique viaduct and belongs among the most beautiful technical monuments in Slovakia. The length of the stone viaduct Chmaroska reaches 113 meters and the bridge contains about 5420 cubic meters of masonry. 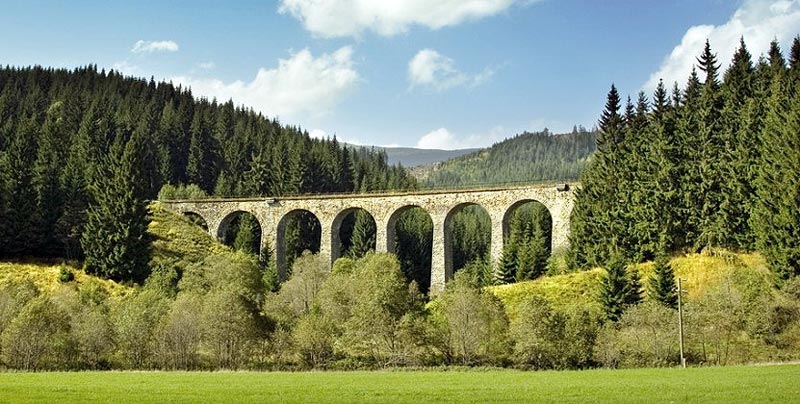 Krasna Horka castle is built on a treeless hill close to Roznava town.

The original Gothic castle was built around year 1320 from a small castle with an irregular triangular footprint, preserved courtyard called upper castle. Krasna Horka castle began more fortifying during the Turkish threat. It was rebuilt as Renaissance fortification with three cannon towers and cannon terrace. At that time castle obtained a cozier interior of Gothic-Renaissance style and its appearance acquired current shape.

In the second half of the 18th century, one of the bastions was rebuilt into baroque-classical chapel of the Virgin Mary. The main altar is a picture of a black Madonna Krasnohorska called Mary, which later became the aim of processions.

Krasna Horka castle houses an exhibition of Betliar Museum, which documents the history and development of the construction of the castle, as well as the way of life and living of aristocracy in the past. Particularly interesting is the castle kitchen and a collection of weapons.

At the end of the 20th century castle and installed a huge medieval catapult, which is used for organizing the annual castle games. 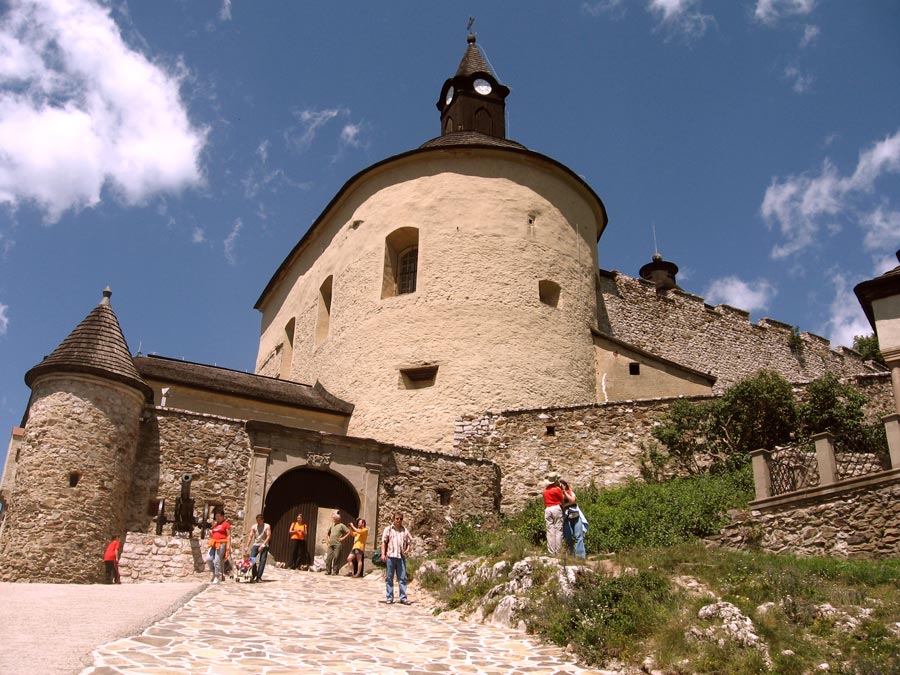 The roman-catholic church of St. James is situated in the most significant town in the Spis area - Levoca.

The church belongs among the largest Gothic churches in Slovakia. It also ranges with the most remarkable ecclesiastical buildings in the Europe.

Construction of the church started at the beginning of the 14th century and was finished in 1380. During the next several decades its internal walls were covered by fresco, which transformed the church into a gallery of medieval art. From 1508 to 1517, the main altar was created by Master Pavol of Levoca, one of the most famous European medieval carvers. Thanks to this wooden altar the church has become famous all over the world.

This unique masterpiece by Master Pavol is the highest wooden winged gothic altar in the world. It is 18.67 meters high with 6 x 4 meters wings. Master Pavol created three more-than-life-size central figures in the altar's cabinet (a Madonna of 2.5 meters and St. James and John of 2.3 meters each), and a composition of the Lord's Supper is in the lower part of the altar. 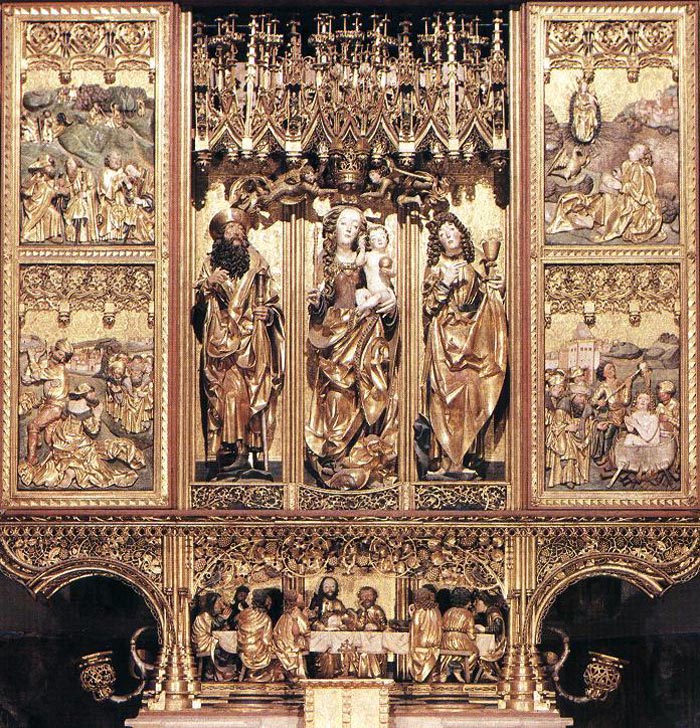