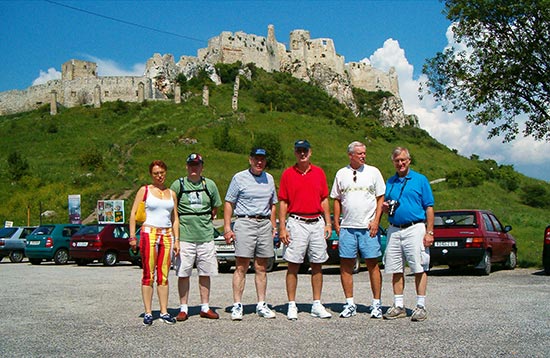 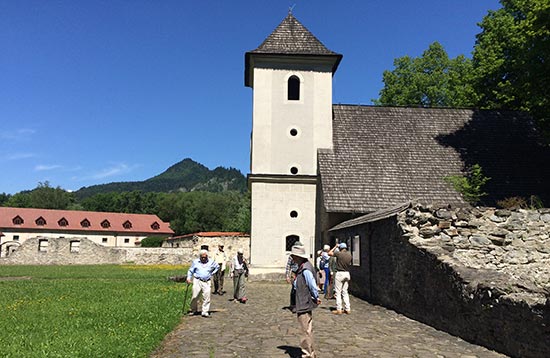 Cruises on the Danube river: 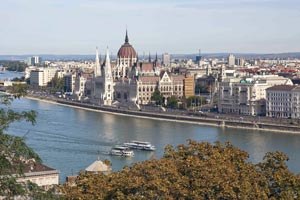 As Europe's second-longest river and a vital means of transportation for 2,000 years, the Danube is the only major European river to flow from west to east. The Danube river rises in Germany's Black Forest and flows through or along the borders of 10 countries – Germany, Austria, Slovakia, Hungary, Croatia, Serbia, Bulgaria, and Romania, where it divides into an expansive delta, the northernmost branch of which continues along the border of Ukraine and Moldova, before entering the Black Sea. The Main-Danube canal, which joins the Main and Danube rivers and stretches for a length of 106 miles from Bamberg to Regensburg in Germany, with a total of 16 locks, has made it possible to travel by river cruise ship from the North Sea to the Black Sea.

Medieval and communist architecture in Bratislava: 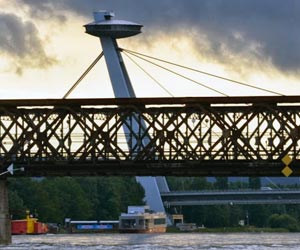 Medieval buildings might fill up the centre of Old Town Bratislava but further out, it is Soviet architecture that dominates the skyline. A visit to these former Communist buildings provides a riveting insight into the history of the city during the latter half of the 20th century. The distribution of these sights around the city also means a walking tour between them is a great way to start exploring off-the-beaten-track Bratislava. The most interesting sights: The UFO and Nový Most, Bratislava Old Town; Petrzalka, the Archetypal Communist Housing Estate; Monument of Slovak Uprising; Slavin Hill War Memorial; Slovak Radio Building. 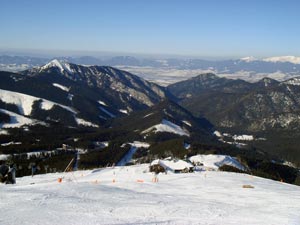 Jasna pod Chopkom is currently the biggest Slovak ski centre. Considering infrastructure, Jasna is divided into four resorts: Chopok north Zahradky, Jasna, Otupne and Chopok south. All in total 29 km trails - 21 km on north and 8 km on south of Chopok, offering all difficulty levels, that is a guarantee of satisfaction for everyone (28% of the tracks are easy, 46% medium and 26% difficult). 6 lifts are suitable for children. Lifts and cable ways are running from the above-see-level 1050 m up to 1830 m (North); the Southern side lift takes skiers almost up to 2000 m asl. Good snow conditions are guaranteed by a fully-automatic high-pressure snowing system York Niege (96 static snow cannons are installed on the hills, covering almost 12 km of the key running tracks). Approximately 2 km of the tracks is illuminated, thus allowing night skiing. 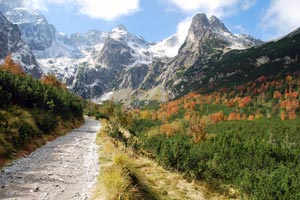 The High Tatras mountains are situated in the northern part of Slovakia, on the border with Poland. In 1949 it was declared to be the first Slovak national park (TANAP) and in 1993 it was together with the polish part of the Tatras mountains declared by the UNESCO to be the "Biospheric reservation of the Tatras". The High Tatras were created about 60 mil. years ago heaving up the granite massif above the level of the surrounding land. It gained its current appearance by the glacier activity 2 mil. years ago. The characteristic peaks (such as Gerlachovský Peak, Kriváň, Rysy, Lomnický Peak), deep valleys of glacier origin (Mengusovská Valley, The Grand and The Small Cold Valley), moraines and mountain lakes (Štrbské Mountain Lake, Skalnaté Mountain Lake ) were formed the same way, too. 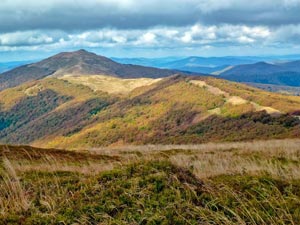 This remotest part of Slovakia is becoming ever more attractive for tourists. They can visit the National Park of Poloniny, which was added to the list of National Parks of Slovakia in 1997. The area of national park is 29 805 ha and acreage of protected area is 10 973 ha. It is is situated at the point where three frontiers meet: Slovak, Polish and Ukrainian. The Park immediately neighbours with the Polish Bieszczadski Park Narodowy and ukrajinský Užansky nacionaľny pryrodny park. The mountain area where the Park was established is also known under the Slovak name, the Bukovské vrchy Mts. The name of the Park derives from the Slovak term for special and unique alpine meadows - poloniny - which spread here above the upper timberline. 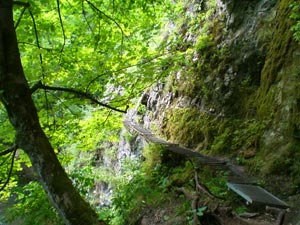 The National Park Slovak Paradise is situated in the eastern part of Slovakia. In 1964 it was proclaimed the Protected Landscape Area and in 1988 recategorised by the government imposition to be the National Park. The park covers the area of 19763 ha (197,63 km2) and the protected zone 13 011 ha (130,11 km2). Originally, the whole region of the National park was a large territory, later divided by the rivers (Hornád, Hnilec) and the creeks (Veľký Sokol-Big Falcon, Suchá Belá-Dry Belá, Biely potok-White Creek) into several bigger and smaller plateaux (Glac, Geravy). During the thousands of years the creeks formed gorges with waterfalls (Kyseľ, Piecky, Sokolia dolina-Falcon Valley, Zejmarská roklina- Zejmarská Gorge), that are typical for the Slovak Paradise. On the plateaux, there you can find a large spectrum of karst formations - esp. sinks, underground caves and holes (Dobšinská ľadová jaskyňa-Dobšinská Ice Cave, Stratenská jaskyňa-Stratenská Cave, Medvedia jaskyňa-Bear Cave, Čertova diera-Devil´s Hole). 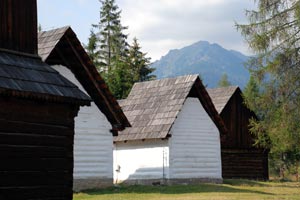 In the age of computers and fast cars we can think about how our ancestors used to live. They lived a practical life in harmony with nature. We can see this with our own eyes in the museums of folk architecture still inhabited by people – Cicmany and Vlkolinec or we can just visit the open-air museums which have not only traditional houses, furnishings and equipment but which offer also the Slovak handicrafts demonstrations. The biggest outdoor exposition in Slovakia is the Museum of the Slovak Village in Martin. It presents all the types of rustic dwellings with their traditional equipment, wooden beds and puffy duvets as well as folk costumes and embroidery displayed on the tables. The Museum of the Liptov Village in Pribylina offers not only a rich programme but also its own exposition of animals, including the original Carpathian animal breeds. The inseparable part of the Museum of Kysuce Village in Nova Bystrica – Vychylovka is a historical logging back swath railway which once used to connect Kysuce and Orava regions. Nowadays it is the only functioning historical logging back swath railway in Europe and one of the few in the world. Museum of Orava Village in Zuberec – Brestova is famous for its 15th century wooden church from Zabreza. It has also precious documents about home linen production, blueprints, cloths and almost forgotten pottery and wood processing. 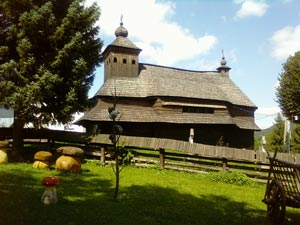 Specific samples of sacred architecture in Slovakia are the wooden churches. Their folk builders expressed the perfect harmony of the human soul with nature and the effort to disengage from earthly worries. Among the oldest are the Gothic wooden churches (for example Hervartov, Tvrdošín). The "articled" churches are other type of wooden churches (for instance Sv. Kríž, Leštiny, Kežmarok, Hronsek). The "articled" churches are those built under the article of the law issued by Emperor Leopold I at the end of the 17th century.
There is also a third type of wooden churches built in eastern Slovakia, mostly in the 18th century. First they were owned by the Greek Catholic denomination, later some of them were changed into Orthodox churches. The special features of the East Christian rite are reflected in their interior decoration and furniture where the unique Carpathian icons dominate. They are normally fitted into iconostases ornamented in the Baroque and Rococo styles.
Wooden churches of the Slovak part of Carpathian Mountain Area, which were added to the list of UNESCO World Heritage Sites in 2008, possess an extraordinary worldwide value. The churches include: Roman Catholic churches in Hervartov and Tvrdošín, Evangelical articular churches in Kežmarok, Leštiny and Hronsek, and churches of Eastern rite in Bodružal, Ladomirová and Ruská Bystrá. 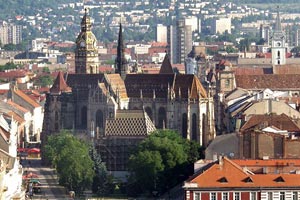 Each year, cities chosen as European Capitals of Culture – in 2013 Marseille and Kosice – provide living proof of the richness and diversity of European cultures. Started in 1985, the initiative has become one of the most prestigious and high-profile cultural events in Europe.