About our trip in the High Tatras Mountains - August 2003 with Mark and Leslie from the USA.

They wrote about the trip:

Hi, Leslie and I have just returned from our first European vacation. We did a lot of hiking in Eastern European nations of Hungary and Slovakia, formerly countries belonging to the Soviet block. 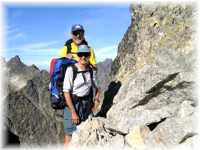 Our first stop was to visit our friend in Debrecen, Hungary. To travel there we flew into Vienna and then took the train, changing trains in Budapest. We stopped in Vienna for a night of rest before taking the train. In Vienna, everything was very familiar, many people spoke English and even the German sounded familiar. All this changed when we got to Hungary. Hardly anyone spoke English and Hungarian is a totally foreign. We somehow managed to get to the Debrecen train station where we met our friend. We stayed an his flat which had 4 rooms and was quite comfortable. Debrecen is the second largest city in Hungary. While there we visited the university where he teaches and we visited the local museum. 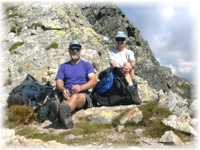 After a couple of days we needed to head for the hills and go backpacking in northern Hungary. We took a bus Miskolc then on to Lillafured and started hiking. We hiked along a road, but the trail soon separated from the road, which made for better hiking. We hiked in the Bukk Hills, a forest of beach trees. One of the highlights of the hike was the village of Rapashuta. Shortly after passing through Rapashuta, we set up our tents and spent the night. The next day we finished our hike in another small village and took the bus to Eger. Eger was an interesting town with a walled village, a castle and a Turkish minaret. We then traveled by bus back to Debrecen. The next day Martin Koska, our Slovakian tour guide, came to pick us up and take us to Slovakia for our hiking in the High Tatras.

For our first few days in Slovakia we stayed at a guest house run by Anna and Michal Kapral. There house was very fancy and they served great meals along with the room. There were great hosts and we recommend them for a place to stay. 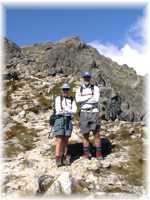 For our first hike, Martin took us to Bystre saddle between two valleys and our introductory hike to the High Tatras. The next day we hiked up Krivan and the day after Slovkovsky. These are some of the highest peaks in the Tatras, at nearly 2500 meters. While hiking up Slovkovsky, Leslie noticed that she was not feeling too well. This was followed by 2 days in bed for both of us with the stomach flu.

After recovering from the flu, Martin took us shopping to get supplies for our backpacking trip through the High Tatras. Veronika, Martin's partner came along with us for the shopping and the first couple of days on our backpack. That evening we started our backpack and hiked into the High Tatras on the Eastern end. A short hike that evening brought us to our first mountain cottage, Plesnivec. The next day we moved on 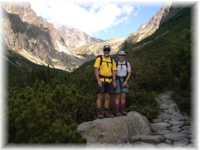 to Zamkovskeho cottage, stopping on the way at Zelene cottage where we met with some climbing friends of Veronika and Martin and waited out a fierce rain storm. We were lucky to not have to be hiking during the storm. We hiked in light rain for the rest of the day.

The next day we hiked through spectacular terrain to get to Zbojnicka cottage. At this cottage we had our '5 minute drill.' Due to the short notice we had given Martin before our trip he was unable to reserve a room at this cottage. The cottage accepted us and many others without rooms. At 10:30 that evening the manager told us all to get out of the dining room. When we were all out the staff cleared the floor after which the manager yelled that it was ready. There was then a scramble to get floor space in the dining room. We had our sleeping pads laid our and our bags 5 minutes after the initial call to clear the room. In 5 more minutes we could hear snoring by some of our fellow campers. We slept on the dining room floor with 30 to 40 other hikers and climbers. The next morning the drill was reversed and we staggered out with our gear to take time sorting it. Fortunately we didn't loose any gear in the mad scramble. We came back into the dining room to eat. While eating, a young man asked where we were from 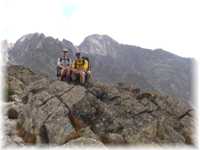 in flawless English. Martin was in shock not sure whether he should answer in English or Slovak. It turned out to be David Hardekopf who had grown up in Los Alamos. He is the son of a man that I once worked for, Bob Hardekopf. He was now going to school in Prague doing studies on the high altitude lakes in the High Tatras. 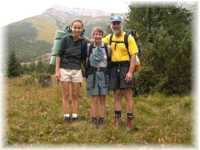 That day we hiked to Sliezsky mountain hotel. While waiting for our room we met a couple of women in the bar from Australia. They were worried because they didn't have a room for Brataslava (capital of Slovakia) the next evening. I told them that we were with an expert on Slovakian travel. Sure enough Martin asked them about what kind of accommodations they wanted and what they expected to pay. He had there reservations made in 10 to 15 minutes. We were all impressed.

The next day we began our trip to Popradskom cottage. After walking a short distance Leslie walked right off the trail! There was about a 10 foot drop from the edge of the trail to the ground. Fortunately, she fell right into some dwarf pines which cushioned her fall and gave her something to hang on to so she wouldn't fall further. It was a little more excitement than I was ready for. She told me that I didn't react well by missing a great photo opportunity. We arrived at our destination around noon and then hiked up to the top of Rysy on the Polish border. On the way back we 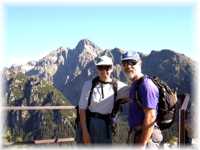 had tea at the highest cottage in the High Tatras.

We hiked out the next day and went to Poprad for some tourist shopping. That evening we stayed at Martin's parents flat. Martin's dad had been a card carrying member of the communist party in the Soviet Union. He taught socialism in the high school. He was totally impressed and said that we were the first Americans that he could remember meeting. He couldn't believe that he would ever have Americans as guests. I was equally amazed about my host. It was great to think that the separation was over and our countries were at peace with each other. The next day Martin took us on the scenic route while taking us to Vienna. We got lost in Vienna, mostly due to my poor navigation. Martin got it all figured out eventually and got us to our hotel. Leslie cried as we waved goodbye to Martin. He had been a great tour guide and become a real friend. 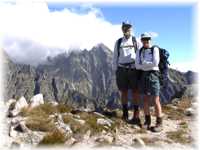 In Vienna we saw both the summer and winter palaces. I was amazed that the Hapsburg Empire had lasted from the late 1200s to the early 1900s, quite a long time! At the summer palace we saw the Lipizzaner horses perform in the evening. We left Vienna the next morning and flew back home without incident.

I would like to make a few comments about traveling in Slovakia and to the High Tatras. The best thing that we did was hire Martin as our tour guide. His website https://www.travelslovakia.sk put us on track to a good time while there. Martin was the complete tour guide, making sure we had accommodations, transportation and sights to see. His English was excellent and he served as a translator. He worked hard to make sure that we had a good time. While we chose to focus on hiking in the High Tatras, he offers many other tours. He recommended that we come back for skiing in the winter. 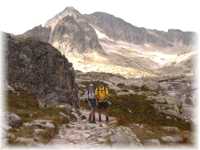 The hikes that we did were frequently crowded because we went in August, peak tourist season. We chose to go in the summer since that was the time that Istvan had time off from teaching. October is much less crowded and has more stable and cooler weather. We chose not to climb while in the High Tatras, because climbing requires a climbing certification from your club. Our informal club, the Los Alamos Mountaineers, does not offer any official climbing certification card and this is rare in the US.

We found the mountain hotels to be Soviet style dormitories with steel bunk beads and 4 to 8 people to a room and bathrooms down the hall. We didn't care for these accommodations. The restaurants and bars at these hotels were very nice though.

Photos from other trips: